Two months ago we spent a weekend in New York City. I’d never been before, and while exploring the city was fun, it was quite a bit different than I expected. It’s not exactly what you see on TV: for one thing, I didn’t find any salsa companies there.

Transportation around the city was difficult. I’m told we should have used the subways, which were scary and foreign to us. We ended up using the Yellow Cabs and Lyft to get around town. They were slow and expensive, in general.  Next time we go we’ll figure out the whole subway labyrinth. Seems way more efficient.

New York is also very much a cash-based city, which I’m not used to. I’m pretty sure it’s to dodge taxes, but for whatever reason, many of their businesses don’t take credit. Here in Austin, everyone takes credit cards. Food trucks, street vendors, t-shirt shops, bars, Everyone. It’s very convenient for me, as I don’t normally carry cash. My bank in not located in Texas, so getting cash means fees, and I cary a front pocket wallet with no space for it.

We had a hell of a time getting a slice of pizza. I don’t think we ever actually got one. We got a bagel, though. Don’t let anyone from New York lie to you: it’s just a bagel. It was a good bagel, but it wasn’t like, head and shoulders above any other bagel. Tasted pretty much like every other bagel I’ve ever had.

I don’t understand having cash: it just seems like something that can get lost. If I lose a credit card, no harm: I just cancel the card. Losing cash is just money down the toilet. But there’s another side of me that wants to have that freedom. I’m always afraid of having eaten at a restaurant to find out afterwards they only take cash. That’s a nightmare.

Upon leaving, sometime between getting out of the cab to the third pit of hell and getting to the front of the line to drop off our bags, I lost my Drivers License. I’m sure you can imagine the panic that overwhelmed me in the moment I noticed. It seemed that holding my hotel key in my wallet, behind my license, stretched it out enough to allow the license to slide out somewhere. Some say it’s in LaGuardia to this day.

So when we got home, after dealing with extra scrutiny at the airport, and then later the Texas DMV, I decided that this could never happen again: I need a new wallet. So I jumped on Facebook and refreshed until I found an ad for someone that sold wallets. I fell upon Forrest and Harold.

These wallets are pretty cool. I went with the Signature Money Clip Slim version. 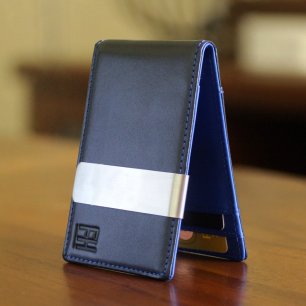 It has a money clip for me to carry cash. They have different color combinations, as you can see. That’s a good look: I bought the version above, the inside is a nice shade of blue. It also has an external pocket on the back side, which is a nice touch. It’s holding 7 different cards, plus a dollar in the clip very comfortably. It could hold much more cash, and probably a few more cards if I wanted to overfill the slots. The best part is I only paid ~30 dollars for it. That’s a decent price for a nicely made wallet.